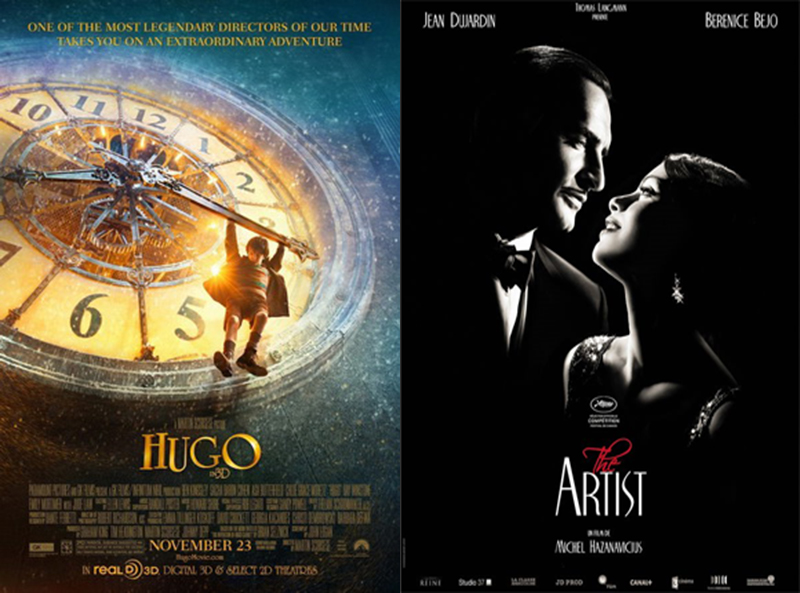 Sunday Feb. 26, the 84th Annual Academy Awards will air on ABC at 7PM eastern.  Read on for a brief summary of the big categories and big contestants who made waves in the film world of 2011.

Nominees: The Artist, The Descendants, Extremely Loud and Incredibly Close, The Help, Hugo, Midnight in Paris, Moneyball, The Tree of Life, War Horse

According to Rolling Stone’s Pete Travers, this year is a battle between two directors trying to capture the magic of cinema from days past: The Artist, a tribute to the early days of Hollywood, and Hugo, Martin Scorsese’s love letter to the work of French film pioneer Georges Melies.  Both films were incredible, though Woody Allen’s Midnight In Paris and the wry, sardonic humor in paradise of The Descendants might sneak up for a come from behind win.

Usually the Best Picture and directing award go hand in hand, though wouldn’t it be lovely if Michel Hazanivicius (The Artist) and Martin Scorsese (Hugo) could both get their proper due?  Probably not, but again Woody Allen (Midnight In Paris) or Alexander Payne (The Descendants) could make a come from behind upset.

Best Actor in A Leading Role

The Best Actor Award is going to be a battle between Ocean’s 11 alumni Brad Pitt and George Clooney.  And it doesn’t help that both turned in career best-worthy performances this year.  But Gary Oldman, in his first Oscar nomination, is always a hopeful bet.

Best Actress in A Leading Role

Meryl Streep holds the record for most Oscar Nominations (17) and has only won twice, the last time being way back in 1982 for Sophie’s Choice.  Can you say ‘overdue’?

Best Actor in A Supporting Role

Even though no one saw Beginners, Plummer turned in a heart-wrenching performance as an elderly man who comes out of the closet following the death of his wife.  Nolte however hasn’t received an Oscar nom since 1998, so the Academy owes him one to say the least.

Best Actress in A Supporting Role

Octavia Spencer has already walked away with BAFTA and Golden Globe awards for Best Supporting Actress for her role in The Help.  Melissa McCarthy had a delightful performance in Bridesmaids but the academy rarely honors comedic performances.

Who are you rooting for this year at The Oscars?  Were there any great films or actors who got snubbed this year (**cough*Drive*cough**)?