Contempo Wall Salutes the Life and Genius of Dr. Seuss 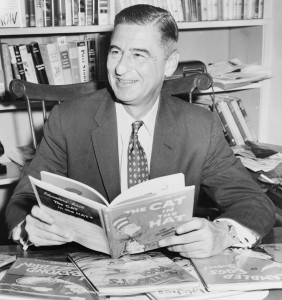 On Friday March 2, Dr. Seuss will be 108 years old.  Yet the work of Dr. Seuss is timeless, ageless, knowing not the boundaries of years past or days gone by.  To this day, his classic stories and illustrations are enjoyed by readers of all ages.

Born in Springfield Massachussetts, Seuss’s real name was Theodore Geisel.  Geisel attended Dartmouth College where he became the editor of the college’s humor magazine, Dartmouth Jack-O-Lantern.  One night, he was caught drinking gin with his friends and as punishment, was forced to resign from the magazine.   He resumed contributing for the remainder of his time at Dartmouth using his middle name, Seuss, as a pseudonym.

After graduating from Dartmouth, Seuss enrolled at Lincoln College, Oxford, to earn a Doctor of Philosophy in English Literature.  During his tenure at Oxford he met his future wife Helen Palmer, married her in 1927, and left school to return to the US without finishing his degree (no, Dr. Seuss was not a real doctor).

Seuss spent much of post-university career working in advertising, publishing cartoons, illustrations and slogans for brands such as Essomarine, Flit, General Electric, and NBC.  During WWII, he worked as an editorial cartoonist, denouncing Hitler and Mussolini, and eventually went to work for the US Treasury Dept. and War Production Board to produce propaganda films and army training films.

After the war, Seuss moved with his wife to CA where he spent the rest of his life writing, illustrating and publishing many of the wonderful books we all loved as children including If I Ran The Zoo, Horton Hears A Who, The Cat In The Hat, Green Eggs and Ham, and How The Grinch Stole Christmas.

Seuss’ legacy lives on through his books and the Read Across America Initiative.  Every year on March 2, Seuss’s birthday, America commemorates the prolific author with National Read across America Day.  So, this Friday, to honor the man who gave us so many brilliant classics, don’t just watch the The Lorax; read a book.

This entry was posted in News and tagged books, cat in the hat, dr. seuss, oxford, read across america. Bookmark the permalink.