Ryan Gosling in “Walt” Gets the Web Talking 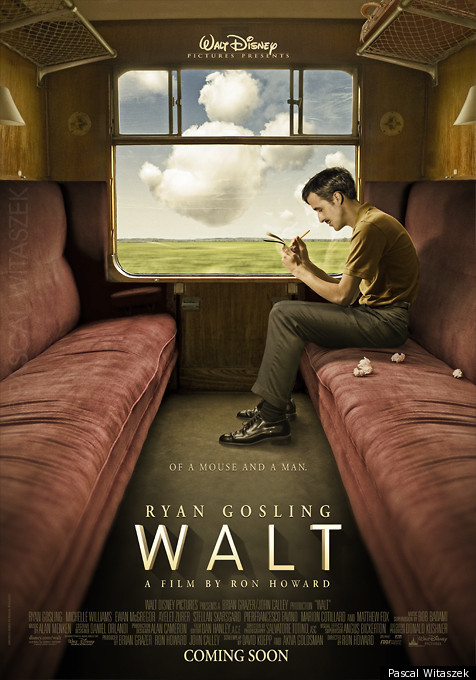 The film industry loves diving into its own past (see Hugo or The Artist), but a fake movie poster made by French graphic artist Pascal Witaszek might be the best piece of Hollywood nostalgia to never hit the big screen.

The poster casts Ryan Gosling as Walt Disney in a fake biopic titled Walt, dramatically tagged with the striking phrase “Of a mouse and a man.”  Gosling is depicted sitting in a plush train car, anxiously sketching, while in the background a suspiciously mouse-like cloud passes by.  In addition to Gosling, Witaszek also imagines Howard as the film’s director along with an all-star cast that includes Michele Williams, Ewan McGregor, Marion Cotillard and Matthew Fox.

Witaszek, a Paris-based graphic designer, has a thing for making up fake biopics.  His other forays include fake film posters for icons such as Gustave Eiffel, Elizabeth Taylor and ABBA.  View them here via Huffington Post.

Although neither Disney, nor any other studio, has made any comments suggesting the possibility of this film’s future creation, all of this Internet buzz must certainly have studio execs talking.