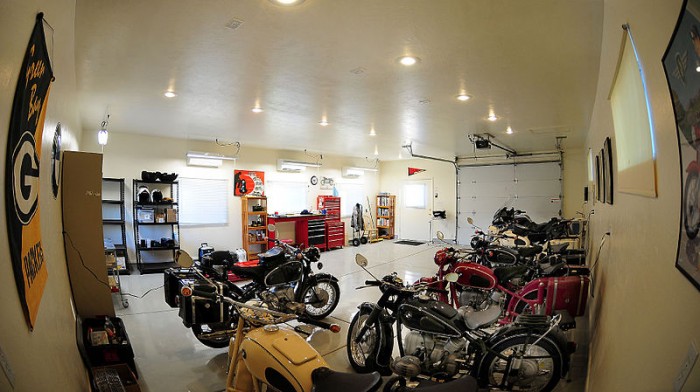 A fun word has been creeping into the modern vocabulary recently.  The term “man cave” is being thrown around all over the place, and rightfully so.  I mean, if you’ve got the extra room who wouldn’t want a man cave?

Wait, you don’t know what a man cave is?

Ok, well basically, a man cave is a space that a guy makes his and his alone for solitary relaxation or to spend time with his buddies.  Typically man caves feature big couches, pool tables, bars, dart boards, big screen TVs, and more guy things, but really it depends on the man.  For some guys, a work-out room is their man-cave or a little woodshop or (as seen above) a garage filled with motorcycles.

Just think of it as a no-girls-allowed type of club for adults.

Writer and handyman Sam Martin proposes that the man cave is an expression of male identity.  In June 2007, he told the Chicago Tribune the following:

“Men have had an identity problem since the women’s movement. They have tried to figure out who they’re supposed to be. For a while women wanted them to be more sensitive, so they were more sensitive. Then women wanted them to be more manly. One of the things I discovered is when men have their own manspace, what they put inside of it is really an expression of who they are. Manspace is about establishing an identity for a man.”

You know what we bet would look great in any man-cave?  A Contempo Wall Modern Entertainment Center Wall Unit.  Display the big screen TV in style, and with custom storage options ranging as far as the eye can see, we might even be able to make a place to stash a few beers.

What’s in your man cave?